Two North African countries are through to the semi-final stage of the 2019 Africa Cup of Nations (AFCON), with Tunisia ending Madagascar’s fairy-tale run and Algeria beatingIvory Coast in a dramatic penalty shoot-out.

At the quarter-final played on Thursday night in Cairo’s al-Salam Stadium, Tunisia notched their first win of the tournament in 90 minutes in comfortable fashion, defeating rank outsiders Madagascar 3-0.

Madagascar, a country with little football tradition and who had not been expected to progress beyond the group stage on their first AFCON appearance, held out until the second half when they were undone by Ferjani Sassi’s deflected shot.

Youssef Msakni added a second on the hour for the Carthage Eagles, ranked 25th in the world against Madagascar’s 108th, and substitute Naim Sliti finished it off on the break in stoppage time to earn them a semi-final against Senegal on Sunday.

“Today, the bar was too high, Tunisia were too strong for us, they were a very well-organised team. The result was logical,” Madagascar coach Nicolas Dupuis said.

“I am very proud of the players and what they have done at this tournament, it’s exceptional. I take off my hat to them.”

Tunisia had drawn their previous four matches at the tournament, beating Ghana on penalties in the last 16.

Tunisian defender Yassine Meriah told reporters in a post-match interview that his team was more focused, and deserved the win.

“We had a good game today and won with a wide score,” he said. “Our spirits were high up, thank God for this win. Today we celebrate, tomorrow we’re back to business, and we have to concentrate a hundred percent for the next game against Senegal.” 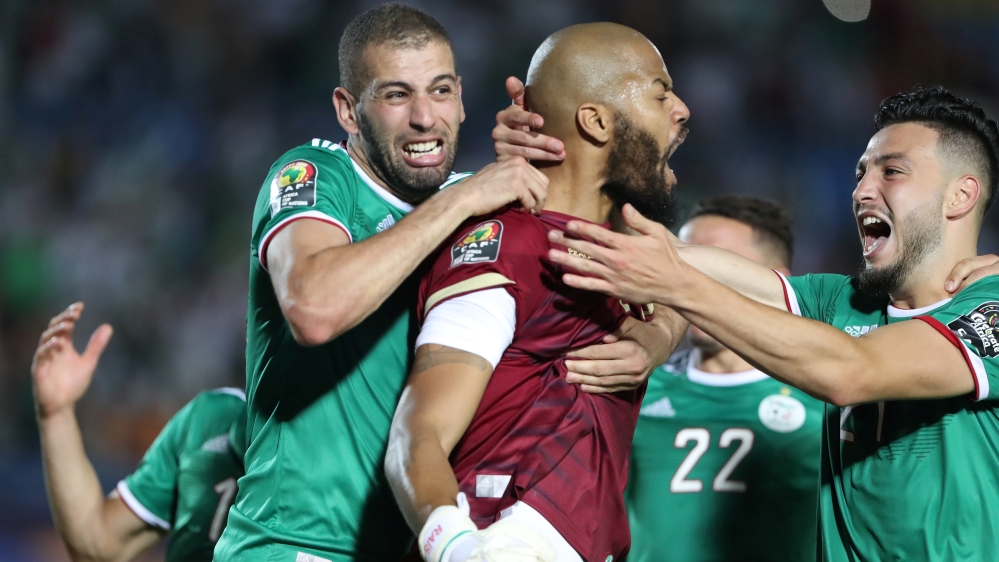 The match in Suez went to extra time after regular time ended in a 1-1 draw, during which the North Africans conceded their first goal of the tournament.

Sophiane Feghouli put Algeria in the lead in the 29th minute, but Baghdad Bounedjah later squandered an opportunity to make it 2-0 by missing a penalty.

In the second half, Ivory Coast’s Jonathan Kodja pushed the game into extra time with a shot into the left-hand corner.

Keeper Rais M’Bolhi made a decisive save for the Algerians during the penalty shoot-out by stopping Wilfried Bony’s effort, while Serey Die’s shot was deflected by the post.

“We kept our concentration until the end,” Djamel Belmadi, Algeria’s head coach, said.

“Penalties, you have to keep focusing until the end to win because if you lose concentration you miss a penalty, then you out you don’t qualify. So, thank God we made it.”

“We are not disappointed because we played a big match, then we failed in the penalties,” he said.

“If we lost during the match, then we would feel more disappointed but in penalties it is 50-50. So, congratulations to Algeria and good luck for the rest of the competition.”

Algeria, who last won the Cup in 1990, will now face Nigeria in the semi-finals

Eerie silence across stadiums on Bundesliga restart after COVID-19 break

Court strikes out suit challenging appointment of Tanko as CJN

Okwe Obi, Abuja The Federal Government said it has delivered a total of 139 truck-loads of foodstuff...

COVID-19: One dead, several others wounded as Prisoners revolt in Aba Correctional Centre