Nigerians are mobilising to stage a #ChurchToo protest against Pastor Biodun Fatoyinbo of the Common Wealth of Zion Assembly (COZA) over the recent rape allegation against him.

The proposed protest followed a flyer and notice of protest which has been circulated on twitter and other social media urging Nigerians to converge for a protest march on Sunday.

Pastor Biodun was recently accused by Busola Dakolo, wife of artist Timi Dakolo of raping her when she was 17 and working as a member of the choir in his church.

Are you a Man 40 yrs and above? Do not miss the Vital Information, it goes off in 2 days! CLICH HERE to READ .

Meanwhile, the pastor has denied the allegations against him by Mrs Dakolo.

However, many Nigerians have taken to social media Twitter to call out the COZA pastor to stabd tria and clear his name while others have resorted to the proposed protest march to call out the pastor.

The protest according to the flyer is against all supposed men of God who ‘hide under the church to commit atriocities’ is to hold at 8:00 AM at the COZA church complex.

The flyer reads in part: “If you are outraged by the alleged sexual abuses perpetrated by pastors and so-called ‘men of God’, join us for a protest march to COZA Church Abuja.

Reactions have continued to trail the proposed protest with some twitter users supporting and signing up for the protest while others kicked against it. Others users also used the medium to share their horrific experiences while others just condemned pastors who assaulted members. 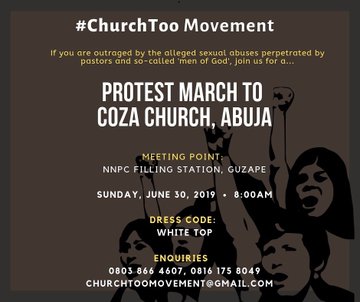 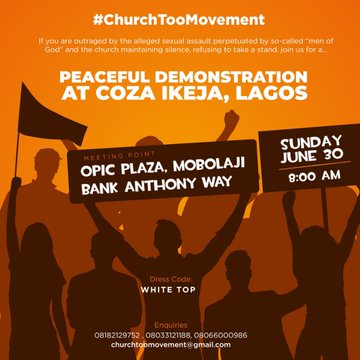 in light of complied allegations over the years, the church maintaing silence & shaming their own, we are taking a stand on Sunday in Abuja & in Lagos.

come out & lend your voices 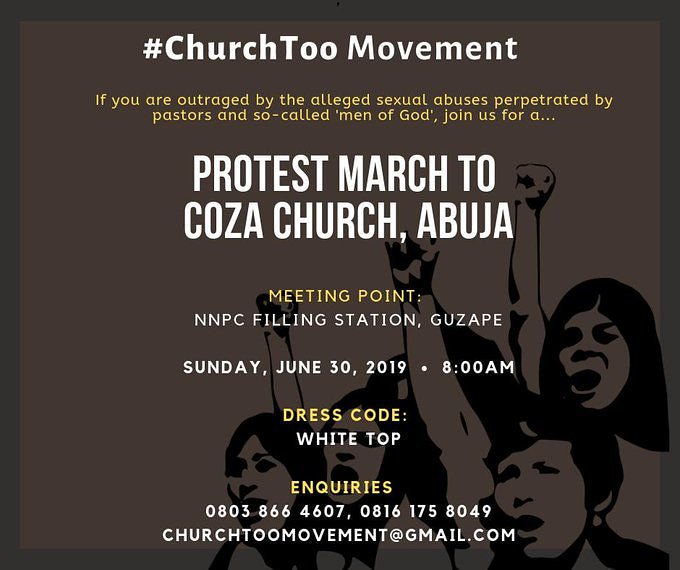 Guys, please if you are in Abuja, be informed that Nigerian #ChurchToo Movement will march on @cozaglobal 8am on Sunday 30th June 2019 to protest the abuse and rape perpetrated by pastors and so-called Men of God like @BiodunFatoyinbo.

Stand up and be counted. 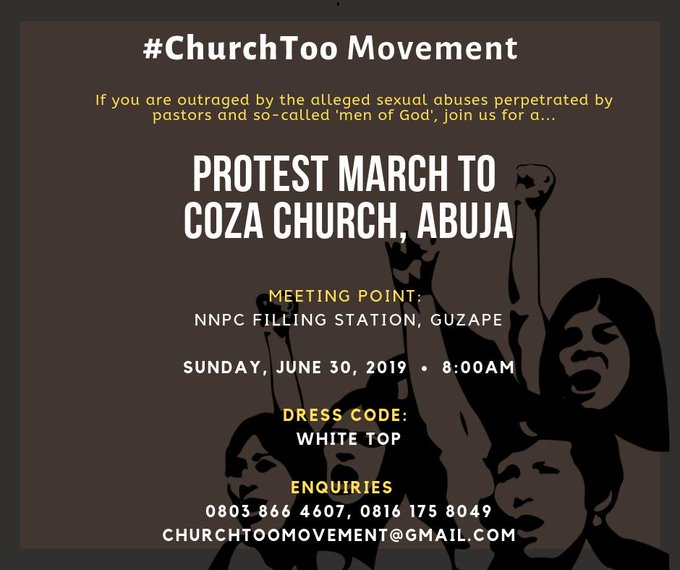 You want to disrupt church service on sunday?
Plz do not go and constitute nuisance during church service, people still have the right to worship. Attack the individual not the church Sit down at your house, both parties are heading to court#COZA #IStandWithTheTruth#ChurchToo

It was my catechist,
I was 8yo,
he said he was cleaning my sin,
We were many,
we finally told,
no one did a thing,
Total cover up.#ChurchToo #endrapeculture

51 people are talking about this

@BiodunFatoyinbo, @cozaglobal, @renoomokri
You’ve been saying @busoladakolo don’t have any evidence. Oya this one have strong evidence, deny it and see American Wonder. #COZA #IStandwithBusola #ChurchToo

This is not entertainers versus preachers. It’s not other denomination against #COZA
This is a CRIME

whoever’s side you’re on regardless. He must be tried and jailed if guilty.
In the unlikely case Busola is making this up, watch what Nigerians will do to her. #ChurchToo https://twitter.com/DamiOyedele/status/1144671760391892992 …

Musicians are standing up for Busola. Pastors are silent. The world is rallying and the church is dead quiet. I’m sick to my stomach.