Millions of people are affected and hundreds of thousands displaced across India, Nepal, Bangladesh and Pakistan.

The number of people killed in heavy monsoon rains across four South Asian countries has passed 200, as authorities continue efforts to reach stranded villagers cut off by surging floodwaters.

Millions of residents have been affected and hundreds of thousands displaced over the past two weeks, with homes and boats washed away across India, Nepal, Bangladesh and Pakistan.

In India, the death toll rose to at least 120 on Wednesday and entire communities were cut off by rising floodwaters which damaged or submerged roads.

“It’s been 15 days [since] this area has been flooded,” a local resident in Assam, where the death toll reached 22, told AFP news agency.

“The damage it has caused is very bad. Cattle have also been affected. Everything has been destroyed.”

In Bihar – which borders Nepal and like Assam is one of the worst-affected regions in India – locals told AFP they were unable to reach food supplies.

About 33 deaths have been reported and 2.5 million residents affected.

Locals were erecting makeshift shelters on elevated land with the meagre belongings they had salvaged from the floodwaters.

In Mumbai, the number of victims from a building collapse following heavy rains rose to at least 13. 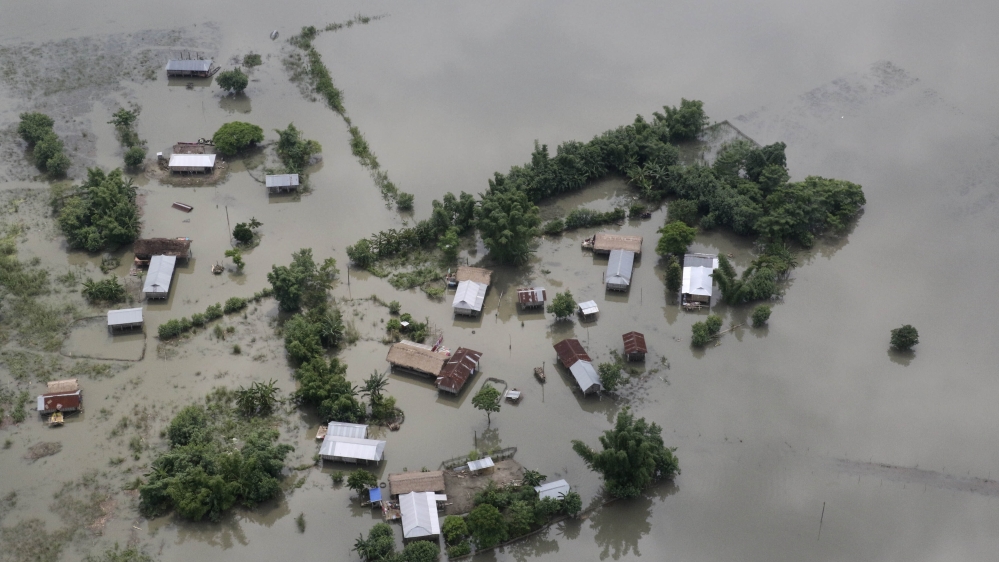 The annual deluge is crucial to replenishing water supplies [AP]

In flood-prone Bangladesh, which is criss-crossed by rivers, about one-third of the country is underwater and people were being killed by lightning strikes, officials said.

In the worst-affected district of Kurigram, deputy district administrator Hafizur Rahman told AFP a woman and four children died after their small boat sank in floodwaters.

Others were killed by landslides in Cox’s Bazar district – home to nearly one million Rohingya refugees who have fled a military crackdown in Myanmar.

In Nepal, the aid agency Save the Children said severe flooding and landslides had left tens of thousands of people homeless, with many stranded outdoors or marooned.

At least 78 people have died and 16,000 families have been displaced.

“It’s absolutely essential that we reach these communities to avoid this turning into a health emergency,” Ned Olney, Save the Children’s Nepal country director, said in a statement.

Further northwest, in the Pakistan-administered part of the Kashmir region, flash floods have killed at least 23 people and damaged 120 houses. Water and power supplies were crippled.

The Department of State Services(DSS), has warned oil marketers and those involved in the distribution of petroleum...

Buhari determined to leave Nigeria better than he met it –Gambari