No Result
View All Result
ADVERTISEMENT

The discovery raises concerns the virus could spread quicker in the densely populated area close to the Rwandan border.

The Democratic Republic of the Congo‘s (DRC) health ministry has confirmed the first case of Ebola in Goma, now the biggest city to have been affected by the disease since its outbreak in the east of the vast country almost a year ago.

The announcement on Sunday raised concerns the virus, which has killed more than 1,650 people since August 2018, could spread quicker in the densely populated area close to the Rwandan border.

In a statement, the ministry said a sick man had arrived in Goma early on Sunday by bus with 18 other passengers and the driver from Butembo, one of the main towns touched by Ebola in North Kivu province. The man was tested “and the results of the laboratory test confirmed that he was positive for Ebola”, the statement added.

“Given that the patient was quickly identified, as well as all the passengers on the bus from Butembo, the risk of the disease spreading in the city of Goma is low,” the ministry said.

The passengers and the bus driver will start getting vaccinations on Monday.

The World Health Organization (WHO) said that although the confirmation of the case was not positive news, it was “long anticipated”.

“We have been doing intensive work to prepare Goma so that any case is identified and responded to immediately,” Tedros Adhanom Ghebreyesus, the agency’s director-general, said on Twitter.

He also said that an Ebola Treatment Centre in Goma has been operational since February.

A case of #Ebola has been confirmed in the city of Goma, #DRC. While not welcome news, it is something we have long anticipated. We have been doing intensive work to prepare Goma so that any case is identified and responded to immediately. https://twitter.com/minsanterdc/status/1150513749234597888 … 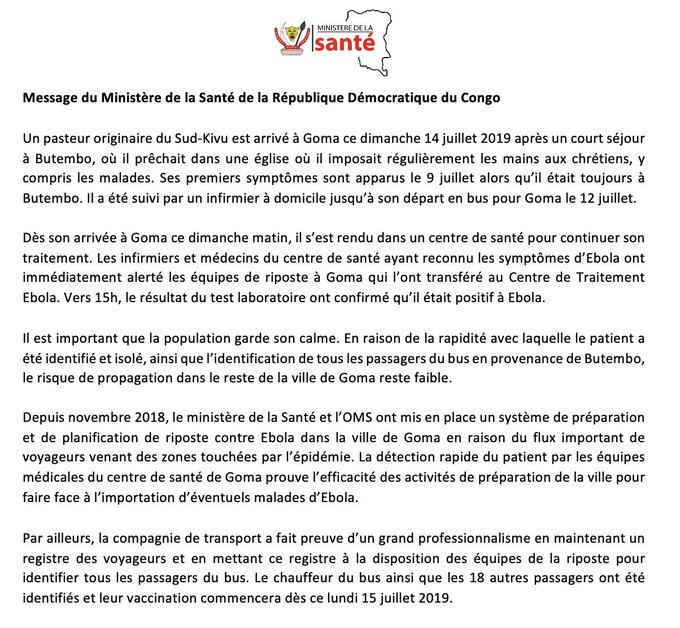 An #Ebola Treatment Centre in Goma, #DRC, run by the @MinSanteRDC and @MSF, has been operational since February, and the person is now receiving care there. As part of the preparedness, 3000 #healthworkers have been vaccinated in this city alone. 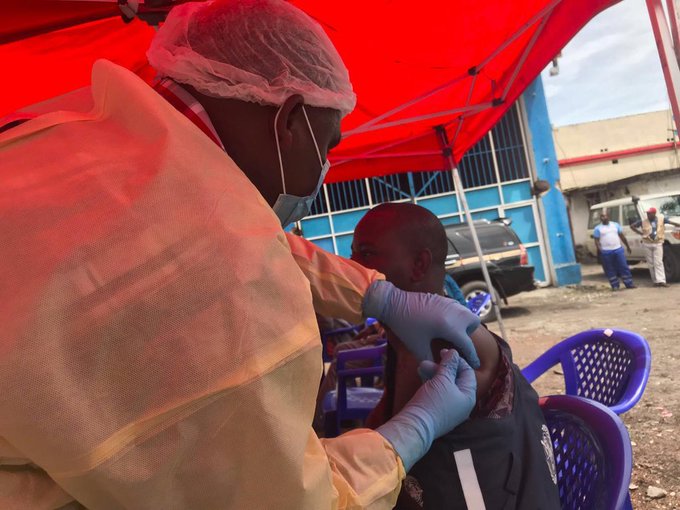 114 people are talking about this

Home to more than one million people, Goma is located south of where the DRC’s current Ebola outbreak – its 10th to date and the second-largest on record – emerged in North Kivu province last year before spreading to the neighbouring Ituri province.

The disease outbreak in the eastern region has so far killed 1,655 people, the health ministry said on Saturday. It added that 694 have been cured and 160,239 others vaccinated.

The efforts to combat the epidemic have been greatly complicated by attacks against health workers and treatment centres, as well as widespread distrust among members of the local population towards both the central government in Kinshasa and the medical strategies deployed by emergency responders.

Ebola causes diarrhoea, vomiting and hemorrhagic fever and can be spread through bodily fluids. An epidemic between 2013 and 2016 killed more than 11,300 people in West Africa.(ALJAZERA)

Hong Kong in limbo 25 years after British handover to China

Re-arraignment of Fani-Kayode’s ex-wife, others stalls