When a young artist drew a portrait of one of his heroes and tweeted it to him, he never expected a response from the subject of his work.

That is what happened to 26-year-old Eli Waduba Yusuf, who told the BBC it was it was like a “dream” when US comedian and actor Kevin Hart directly contacted him about the portrait he’d created.

Yusuf, a hyper-realism artist from Nigeria, had spent two weeks drawing a detailed pencil image of Hart that looks like a black and white photo. 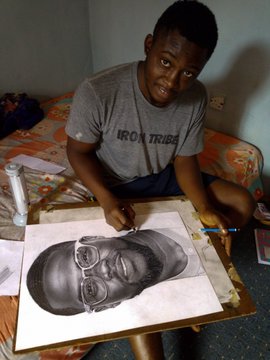 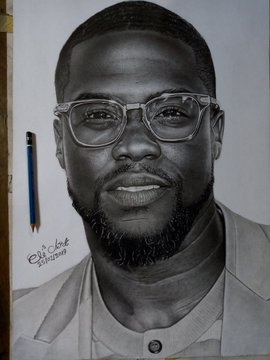 My name is Eli Waduba Yusuf
Am a Nigerian, based in kaduna. Am a hyperrealism PENCIL Artist, I hope to become like @Harinzeyart. Please Retweet, let @KevinHart4real see it, thank you

Yusuf tweeted out his masterpiece, tagging Hart in the hope that the actor might see the finished product.

Others also saw the work and began tweeting Hart about the talented young artist.

Eventually, the artwork came to the actor’s attention and he responded to one user: “Talent out of this world… Wooooooooow”.

The actor said that he not only wanted to buy the portrait, but also commission Yusuf to draw portraits of a few of his celebrity friends.

The reaction to Hart’s reply had more than 310k likes in the first 24 hours with people tweeting their congratulations to Yusuf and wishing him well.

I see it and I want to purchase it…I also want to support you and your amazing talent by giving you a fee to do a pencil drawing of 3 of my celebrity friends that I can gift it to. DM your info and let’s get to work!

My name is Eli Waduba Yusuf
Am a Nigerian, based in kaduna. Am a hyperrealism PENCIL Artist, I hope to become like @Harinzeyart. Please Retweet, let @KevinHart4real see it, thank you

Yusuf said he was “thrilled” to be contacted by the actor: “I still can’t believe it; it feels like a dream. It’s been so overwhelming. Kevin Hart has just blew my mind.”

He went on to say: “A lot has changed – a few days ago I was just a local artist who loved drawing and would have loved the world to see my work, but I didn’t know it would happen so fast.

“Here I am having an interview with the BBC – please someone should wake me up!”

Rivers of tears in sanctuary

How we robbed and raped our female victims

King of the jungle

Buhari should go on with fight against corruption, insecurity - APC chieftain Gambo

Boko Haram: Nigerians in Diaspora seek working solutions, partnership from US, UK others in tackling insecurity

Chinelo Obogo   The Association of Nigerian Professionals in Europe (ANPE) has challenged the United States, United...