(BBC)Turkey has been given a deadline of the end of July to choose between buying US fighter jets and Russian anti-aircraft missile systems.

Acting US Defence Secretary Patrick Shanahan set out the ultimatum in a letter to his Turkish counterpart, Hulusi Akar.

Turkey, he said, could not have both America’s F-35 advanced fighter jets and Russia’s S-400 systems.

The two Nato allies have been locked in a row over the S-400 for months.

America argues that the Russian systems are both incompatible with Nato defence systems and pose a security threat, and wants Turkey to buy its Patriot anti-aircraft systems instead.

Turkey, which has been pursuing an increasingly independent defence policy, has signed up to buying 100 F-35s, and has invested heavily in the F-35 programme, with Turkish companies producing 937 of the plane’s parts.

What consequences does Turkey face?

Mr Shanahan says in his letter that the US is “disappointed” to hear that Turkish personnel have been sent to Russia to train on the S-400.

The letter includes a schedule for winding down Turkish participation in F-35 pilot training. 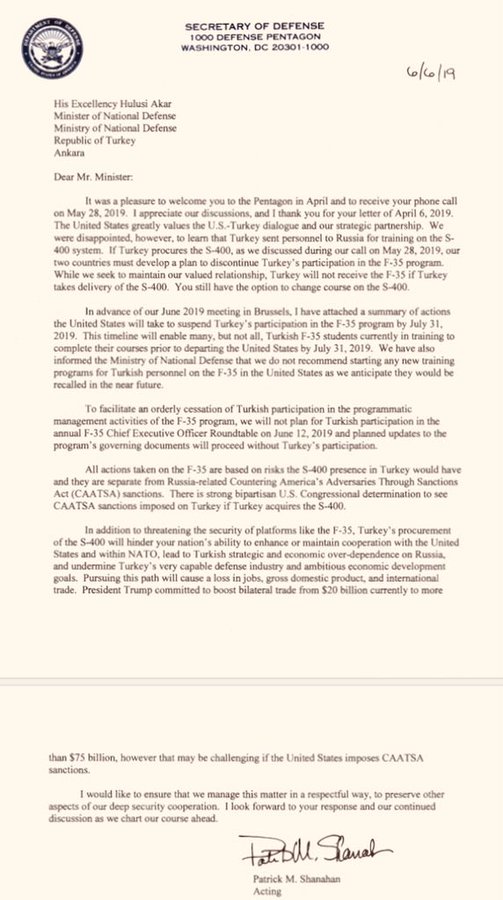 Text of Shanahan letter to #Turkey on ending its participation in F-35 program over Russia S-400 acquisition. Mentions Congress support…

“We do not want to have the F-35 in close proximity to the S-400 over a period of time because of the ability to understand the profile of the F-35 on that particular piece of equipment,” US Under Secretary of Defence Ellen Lord told reporters.

The first four F-35s due to be delivered to Turkey have still not left the US, officially to allow Turkish pilots to train in them in America.

Turkish President Recep Tayyip Erdogan said on Tuesday his country was “determined” to proceed with the S-400 deal.

“Unfortunately we haven’t received a positive proposal from the American side on the subject of Patriots like the S-400s from Russia,” he said.

Turkey has the second-largest army in Nato, a 29-member military alliance set up to defend against what was at the time the Soviet Union.

The head of Russia’s state defence conglomerate Rostec, Sergei Chemezov, was quoted as saying on Friday that Russia would start delivering the S-400 to Turkey in “about two months”.

The S-400 “Triumf” is one of the most sophisticated surface-to-air missile systems in the world.

Russia says it can hit aerial targets ranging from low-flying drones to aircraft flying at various altitudes and long-range missiles.

5 killed in confrontation in SW Pakistan

2023: Nothing will stop INEC from holding elections —Johnny Ucheaga

2023 elections:  New hopes and the challenges

Why Nigerians must get coming elections right—Emeka Ugwuoju, NESH founder

Free and fair election: An imperative

President Buhari has vowed that he will bequeath to Nigerians, a free and fair election that will...

Power of just one vote

2023: Nothing will stop INEC from holding elections —Johnny Ucheaga

2023 elections:  New hopes and the challenges