Medellin, Colombia – The Venezuelan exodus may exceed eight million people by the end of next year, which would make it the largest migration crisis in the world, according to a special working group of the Organization of American States (OAS).

The group’s projection puts the exodus between 7.5 million and 8.2 million in 2020, far surpassing the 6.7 million people who in eight years have fled Syria.

“It’s not an economic or a voluntary migration,” said David Smolansky, an exiled Venezuelan politician who presented the final report with Harvard University economist Dany Bahar to the OAS assembly on Friday. “It’s a forced migration.”

The projections were previously released as part of the group’s preliminary report in March, but on Friday OAS representatives, pointing to the report, appealed to the international community for more support in addressing the growing number of Venezuelan migrants and refugees.

The UN estimates that four million people have already left Venezuela in recent years, fleeing hyperinflation, violence and scarcity of medicine and food as the country descends deeper into a catastrophic collapse. The wave of displaced Venezuelans has already stoked tension and instability in South American countries, and the prospective doubling of the total exodus in the next 18 months raises grim prospects for the region’s future.

It is part of a global problem. The UN has said there are more people displaced today than at any time since the global body’s founding in the aftermath of World War II.

Yet the OAS report showed that international funding for a response to the Venezuelan crisis lags behind other crises. While aid dollars per Syrian refugee hit $5,000 in 2018, for Venezuela it sits at two percent of that figure, just $100 per displaced person. The UN’s 2019 response plan for the Venezuelan migration has only been 21 percent funded.

“Help and financing to the host countries and communities is crucial,” Bahar told the OAS assembly. “There is still a lot left to be done by the international community to complement the efforts that host countries have made.”

The strain of the arrivals has recently driven some South American nations to clamp down on entry access for Venezuelans. Peru and Chile tightened restrictions on Venezuelans while Ecuador instituted a similar move that was blocked by its high court.

Those moves leave more Venezuelans stuck in Colombia, which shares the longest border with Venezuela and already hosts 1.3 million displaced Venezuelans, more than any other country. 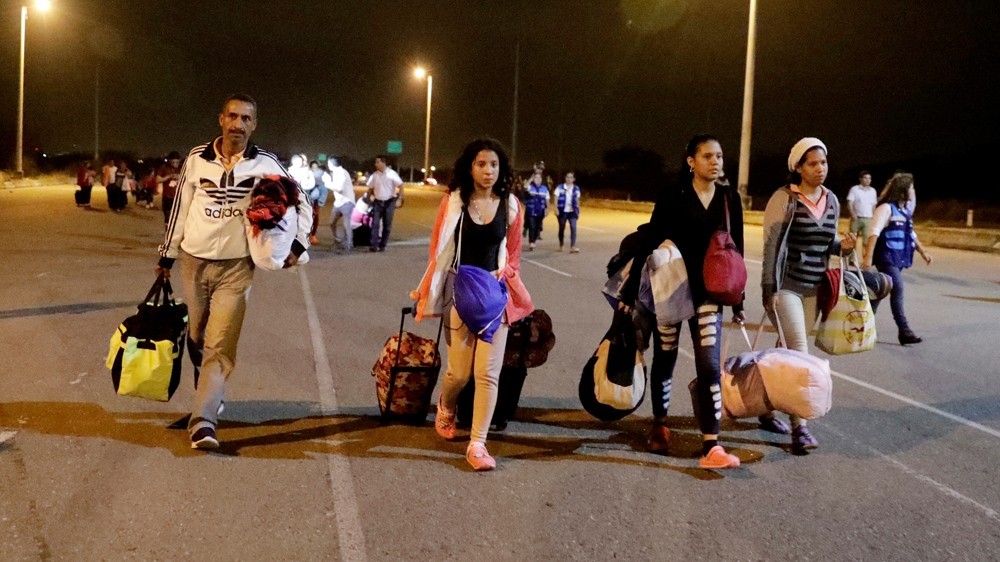 “The position of the government of Colombia has been one of opennesses, but we need for this to be a regional process,” said Felipe Muñoz, Colombia’s border manager, presidentially appointed to respond to the crisis. “Little by little we are becoming the only country free of restrictions.”

The number of migrants and refugees has severely strained public services, enrolling children in school, seeking basic healthcare and overwhelming the ability of migration agencies to register every new arrival. Thousands of Venezuelan families sleep on the streets across Colombia, begging for their daily food. Up to a thousand every day travel the long mountain highways on foot, searching for opportunity elsewhere in the continent.

“There is no doubt that eight million Venezuelan migrants in the region would be unsustainable for the recipient countries,” said Ivan Briscoe, Latin America director for the International Crisis Group, noting that he only thought the migration would reach that figure by next year’s end if Venezuela “suffers a total meltdown.”

For now, the crisis has no end in sight, with President Nicolas Maduro maintaining his grip on power despite international pressure and outcry. Political opposition leader Juan Guaido raised the hopes of some in January when he declared himself interim president and promised to unseat Maduro, but since then he has proven unable to wrangle any real power.

Briscoe said that millions more migrants in Latin America could push regional governments towards a more forceful approach to affect political change in Venezuela. He also noted that US sanctions since early 2019 have contributed to the ever-deepening economic downfall of that once-wealthy nation, although the origins of the Venezuelan crisis long predate US sanctions on the general economy there.

Pilin Leon, a representative for a coalition of Venezuelan migrants at the OAS, said she saw no reason the flow of people from her country would slow any time soon. Her group implored nations to adopt policies that would allow Venezuelans the freedom to resettle far beyond Colombia, to work legally and to access healthcare and education for their children.

“In Venezuela it isn’t a formally declared war, but there is a situation of violence in the streets of all the cities,” she said. “Our situation is one of displacement that deserves legal recognition as a refugee population.”

We‘ll do everything to qualify for World Cup –Okoye assures